A MagnetoBron is a device that magnetises water, in other words it ionises or polarises it. All three MagnetoBrons produce magnetised (ionised, polarised) water that is used to keep the body healthy and to fight internal and external diseases. The MagnetoBron is for all things alive – magnetised water stimulates the function of all the organisms in the human body and is equally beneficial for plants and animals. All life acquires more vitality and resistance.

Source of strength for a healthy and balanced life!!!

Type A – 50% negative / 50% positive
The MagnetoBron Type A produces water that is 50% negatively and 50% positively ionised. There are complaints that are due to a surplus of positive or negative charge, but down to a shortage of both. In those cases you use water A, as this is positively and negatively ionised. This magnetic water has a stabilising and regulating effect.

Type B – 100% positive
The MagnetoBron Type B produces 100% positively ionised water. This magnetic water boosts cell formation and invigorates the psyche. Physical complaints that are related to slower cell formation or to cells dying off , and psychological complaints, such as depression, despondency, melancholy and dejection point to a surplus of negative charge. The other end of the scale is a surplus of positive charge. For those complaints we use water B, which is positively ionised (protons) and boosts cell formation and invigorates the psyche.

Type C – 100% negative
The MagnetoBron Type C produces 100% negatively ionised water. This water has a calming and restful effect. Psychological irritability, complaints of a physical nature, such as inflammation and itches, irritations and all problems that can be caused by allergies in an ascending level of seriousness – cold, eczema, intestinal disorders, bronchitis, asthma and CARA and others point to a surplus of positive charge. The other end of the scale is a shortage of negative charge for which we use water C, which is negatively ionised. This water has a calming and soothing effect. For example, the Japanese treated the victims of Hiroshima and people who were hit by napalm or incendiary bombs internally and externally with ionised water

Source of strength for a healthy and balanced life!!!
A MagnetoBron is a device that magnetises water, in other words it ionises or polarises it. This physical process occurs by adding a pinch of sea salt to the device. The compound water plus sea salt (sodium chloride) passes through a permanent magnetic circuit of 48,000 Gauss. The flow can be adjusted by means of a drip system. The slower it drips, the stronger the water is magnetised.

The MagnetoBron is for all things alive – magnetised water stimulates the function of all the organisms in the human body and is equally beneficial for plants and animals. All life acquires more vitality and resistance.

To make water conductive and to ionise/magnetise it you need substances that form ions in the water. Sea salt (= sodium chloride (NaCL) and iron (Fe)) ionise the water and the MagnetoBron magnetises it. When sea salt dissolves in water, the molecules split into positive sodium ions and negative chlorine ions. These ions move in the liquid and can absorb and transport a magnetic charge.

Instructions for the MagnetoBron
Boil some tap water, leave to boil for little while and then leave to cool. Add a pinch of sea salt to the top of the MagnetoBron and then pour on the water. With the red cap you determine the drip speed by slowly turning it to the left or to the right. The slower it drips, the more the water is ionised. If you prefer bottled mineral water (without carbon dioxide) you do not need to boil it for oral use.

In order NOT to lose the strength of the ionised water, you may NOT:
+ Boil it afterwards
+ Put it in the fridge
+ Get it into contact with metal (spoons, pans, etc.)

Shelf-life and transport
Magnetised water is sensitive to UV rays. Therefore the carafe has been given a light, transparent shade in order to increase the shelf-life to 5-6 days. During transport or storage in a darker bottle, the shelf-life is approximately 15 days.

It is best to drink the water before breakfast but after your two other meals of the day. The enclosed measuring cup shows 35ml. 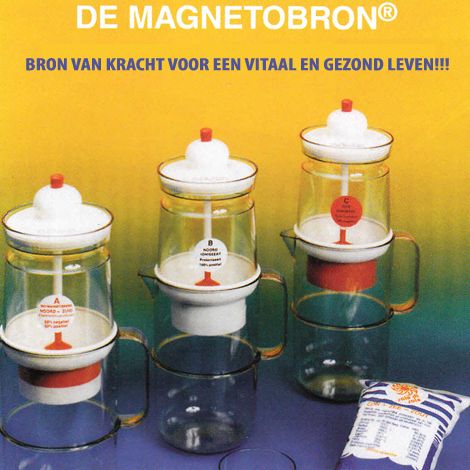